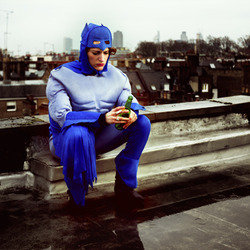 Critically acclaimed DryWrite make their Edinburgh debut with the world premiere of a hilarious one-woman show written and performed by Phoebe Waller-Bridge, one of our very brightest upcoming talents (Evening Standard)

This is a rip-roaring account of Fleabag, a twenty-something female trying to find her place in the world. With the help of an incredible original score by Isobel Waller-Bridge, we follow Fleabag's journey through life, love and work.

We are always told to be ourselves. But what if that doesn't seem to get us anywhere? What if when we get serious, people laugh? What if when we comfort someone, they end up killing themselves? What if when we fuck up a job interview, we get the gig? Welcome to the world of Fleabag where the rules are out the window and she's getting confused. She's angry, pervy, cruel, forgetful, unforgiving, flippant, capricious, but undeniably honest. And you can't help but love an honest person. Or can you? Maybe she's an alien. Maybe she's alone. Or maybe... just maybe, there is a little fleabag in us all. For one hour only, Fleabag lets us see the world through her eyes. It may not be pretty but it's funny as hell.

Fleabag is an anti-heroine, a refreshingly unique example of today's modern woman. This is the portrait of a girl who isn't afraid to admit what she thinks is wrong with her. It's like meeting a friend for an up-close and personal chat. This is comedy story-telling at its very best with all the unspoken nitty-gritty of real life.

Fleabag has already been optioned for a television show by Two Brothers Pictures who are best known for making Full English for Channel 4.