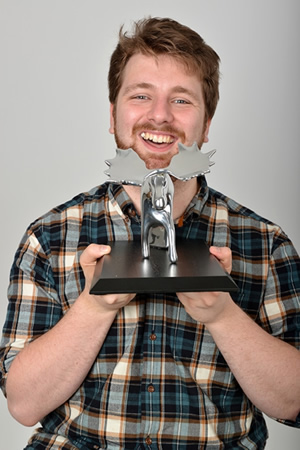 Over 600 comedians entered the competition this year, with heats taking place around the UK. The other finalists were Alex Smith, Alistair Williams, Angus Dunican, Sean Cannon and Steve Bugeja.

Novellie (pictured), who takes away the £1500 prize money and a shiny moose trophy, says: "I'm amazed and surprised to have beaten so many incredible comedians - the final was very tough and I'm overjoyed!"

Originally from Johannesburg, Novellie has more recently resided on the Isle of Man. The 22 year-old is represented by CKP Management and is performing as part of Lunchtime Special at Just the Tonic and Standing Up For Something as part of PBH's Free Fringe throughout the Edinburgh Fringe Festival.

The winners were decided by an industry panel, and an audience vote, at the live final in Edinburgh hosted by Chris Martin. The awards were presented by BBC Worldwide's Toby White and Amused Moose organiser Hils Jago.