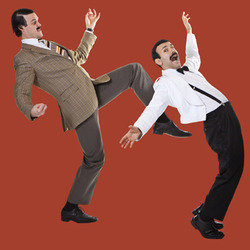 This globe-trotting show has been selling out at Edinburgh Fringe every year since 2008. Still fans return time and again, knowing that only a third of the show is scripted, so everything stays fresh. Basil, Sybil and Manuel serve up their madcap mayhem and a three-course meal with the audience as diners in their hotel. It's two hours of fully immersive, highly improvised and site-specific comedy theatre. Just don't mention the war! Internationally acclaimed by audiences and critics alike. '...rip-roaringly hilarious night out' (This is London). '...utterly delicious entertainment' (Edinburgh Evening News).