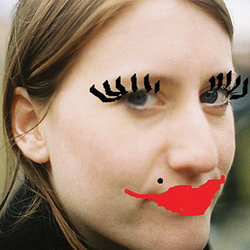 Fanny has got a story to tell. But she can't seem to find the right words. Luckily John is here and, with the audience's help, he's going to tell it just right.

In 2010, a founding member of London based TheatreState found herself selling her feet to fetishists in order to fund an arts internship and she felt a long way from empowered.

Then she discovered Fanny Hill, the infamous eighteenth century story of a young woman who stumbles across prostitution and loves it. The novel by John Cleland was written using Fanny's confessional voice and titillates the male reader with descriptions of Fanny's body whilst attempting to promote prostitution as a fantastic opportunity for Fanny to explore her sexuality.

TheatreState invites the audience to delve into the mania of the media and examine why we are bombarded with peculiar, fantasy images of women. Originally developed at The West Yorkshire Playhouse as part of Transform, the production has been inspired by interviews with young women aged 13 - 18 and journalists including Hadley Freeman and Sarah Ditum, The Guardian, Kevin Maguire, The Mirror and Equality Now (who spoke at the Leveson Enquiry on the representation of women in the press). And a few weird MPs after five pints too many at the Houses of Parliament's Bar.