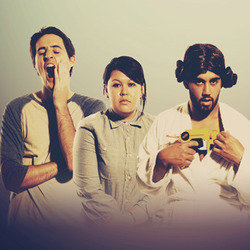 Have you ever wondered if it's lonely inside a Poké Ball? Or if Optimus Prime has to file tax returns? Or if the Hufflepuff Badger is based on an actual badger? Fanfiction Comedy is the show that lets you delve deeper into your pop-culture fantasies than you ever wanted to delve. Winner of Best Show at the 2012 NZ Comedy Guild Awards, Australasia's cult comedy sensation finally hits the UK. Join NZ's best young comics and their celebrity guests as they read their very own irreverent and charming stories. 'A joyous hour of unashamed awkwardness' (Age, Melbourne).