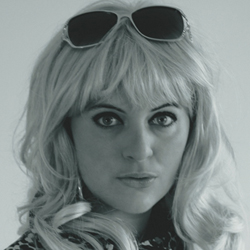 Beverley relaxes in a Juicy Couture velour leopard print jumpsuit, on a newly upholstered chaise longue (on loan from best friend/business partner Paul). We're in the heart of Sheffield city centre, Cafe Rouge: the venue for the exclusive launch of her upcoming Edinburgh debut. Bev says of the show: 'The BBC said to me, "Bev, you need a vehicle", so I've got one. Inclusive of drinks trolley. Get onboard'. As seen in Lady Garden - 'Britain's Funniest Women' (Sunday Telegraph), 'Joyous-excellent comic writing and acting' (Chortle.co.uk), Absolutely Fabulous and BBC3's Live at the Electric.

On her debut show, Bev said: "Join me for a journey of a lifetime; my lifetime. Packed to the gills with stories, larks and probably a song or two if I get my way. The BBC said to me 'Bev, you need to get yourself a vehicle', so I've got one. Inclusive of drinks trolley. Get onboard."

Bev is a creation 10 years in the making. Eleanor has performed as Bev to audience up and down the country, and is currently developing a sitcom around her called A Coffee and a Sit Down.

Eleanor founded, wrote and performed in award-winning sketch group Lady Garden, who enjoyed four critically acclaimed runs at the Edinburgh Fringe following their debut in 2008. As part of Lady Garden, Eleanor has appeared on Live At The Electric (BBC Three) and Sketchorama (BBC Radio 4), as well a series of sketches for BBC Comedy Online.

Individual TV credits include in Absolutely Fabulous (BBC One) and Uptown Downstairs Abbey for Comic Relief. Eleanor also plays a lead role in Asylum Seekers, a short film that has been selected for the Venice Film Festival.