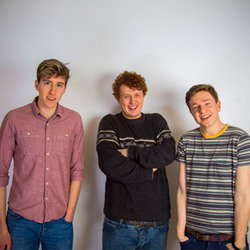 Following last year's phenomenally successful I am, I am, 'These boys are built to last, catch them while you can' (List), comes a sartorial odyssey that's decked out, dolled up and dressing down. Fresh from a sell-out Footlights Spring Revue in Cambridge, these exciting, young British comedians bring you a hilarious, gregarious new hour of comedy, suitable for all. 'Charming, imaginative and just downright bloody funny' (TCS). With over sixty costumes in fifty minutes, and both the current and former presidents of Cambridge Footlights, this show is sure to have you in stitches. Welcome, Edinburgh, to the wardrobe.

Sixty costumes in sixty minutes - the writers of the Cambridge Footlights Spring Revue are decked out, dolled up and dressing down in this hilarious, gregarious new hour of comedy.

These young British comedians, including both the current and former president of the world renowned Cambridge Footlights return to Edinburgh with their sell out Spring Revue.

Dressing Down was first performed as the much-anticipated Footlights Spring Revue at the ADC Theatre earlier this year, and sold out its run in record time. Now, rewritten as a fast-paced hour for Edinburgh, this "charming, imaginative and just downright bloody funny" (TCS) sketch show brings something new to the fringe.

Dressing Down sees a return to the Footlights style of family comedy that charmed the nation; this show is suitable for all ages. Centered on a magic wardrobe, the show is a sartorial odyssey with high-speed onstage costume changes and a host of characters guaranteed to have you in stitches.

The company are delighted to return to Edinburgh: last year's phenomenally successful I Am I Am received rave reviews reached the final of this year's National Musical Comedy Awards.