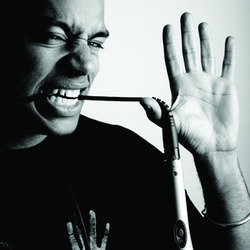 The international rapper turned comedian Doc Brown is back with his tongue in cheek take on hip-hop culture. Fresh from supporting Ricky Gervais around the world, and appearances on Russell Howard's Good News, The Inbetweeners, Rev, Derek and The Office Revisited, Doc is a must-see act. 'If Brown keeps mining this rich seam of hip-hop comedy, his fame should look after itself'. (Guardian). 'A seamless mix of truly inspired hip-hop and stand-up. He's a total star an utter joy' (Time Out).

Doc brings his touring show to Edinburgh - tongue in cheek take on hip-hop culture and his perfectly crafted songs and stories. The brother of acclaimed writer Zadie Smith, Doc is well on his way to becoming a big name in comedy. He is a regular on the London comedy circuit and has appeared in BBC's Russell Howard's Good News and Rev, as well as, Channel 4's The Inbetweeners and Derek. Doc also created, writes and appears in the BAFTA winning 4 O'Clock Club on CBBC.
Along with Ricky Gervais, Doc co-wrote and performed Equality Street for this year's Comic Relief: http://www.youtube.com/watch?v=XmTV62mE1PA&feature=youtu.be

He also appeared at Wembley Arena, alongside the likes of Russell Brand and Eddie Izzard as part of Give It Up For Comic Relief.