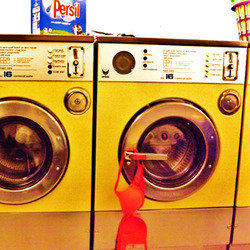 Working in a laundrette, local busy body Esther has a largely mundane existence. But not today... Voyeuring through the dirty laundry and lives of her colourful array of customers, Esther and her surprisingly resourceful sidekick, Tristan, become accidentally embroiled within the darkest, juiciest scandal their small town has ever known. Disappearances, suspicious characters and inescapable evidence points to one haunting conclusion and proves madness is closer to genius than ever imagined. Following two previous sell-out Underbelly shows, hit writer Rachel Hirons returns with a brand new comedy, directed by Kat Hoult. This is one not to be missed!