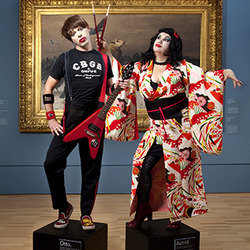 Adult themes and some strong language.

Fans of Spinal Tap and Flight of the Conchords, say 'hallo' to your new favourite band. Catch Berlin's prince and princess of indie rock before they release their feature film in 2014. A lipstick-smeared, tantrum-loving, sonic collision between B52's, Kraftwerk and early Ramones. Their songs are ridiculously infectious and their live show is one of the most irreverent and hilarious gigs you're ever likely to see. 'Wild cabaret rock concert' ***** (Herald Sun). 'Pitch Perfect pop parody' **** (Scotsman). 'Hilarious, outrageous!' **** (List). 'Excruciatingly funny' **** (Age).

Having spent 2012 supporting Amanda Palmer at The Roxy in LA, and touring their smash hit show Kunst Rock in New York, Australia, Canada and Belgium, the Prince and Princess of the Berlin underground Indie rock and Europop scene, Otto & Astrid Rot are squeezing in their first visit to Edinburgh since their hugely successful 2009 debut just before heading off to tour Australia and then on to North America to make their first commissioned feature film.

Astrid and Otto are Die Roten Punkte (The Red Dots). Orphaned as kids when Astrid was 12 and Otto was 9, the brother and sister duo found shelter in a Berlin squat and never rockin' looked back.

A lipstick-smeared, tantrum-loving, sonic collision between the B52s, Kraftwerk and early Ramones, Die Roten Punkte are truly one of a kind.