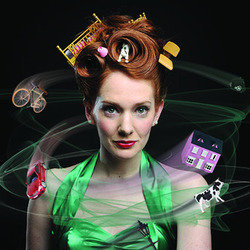 Some people go through life easily, others are accidents waiting to happen. Diane Spencer is a natural disaster. Like a Calamity Jane Asher, her simple plans turn into ludicrous events, spiralling out of control. Told from the setting of a roof, Diane engages with a conversational style, her cheery demeanour a conduit for her striking observations and sometimes sick but always hilarious stories. Dark humour combined with sparkling wit, Diane demonstrates a talent for interweaving confessional stand-up and smart social observations. Winner, Chortle Best Newcomer 2011 and The Scotsman's Top 5 Hottest Comedy Shows 2012. ***** (Sunday Express).

In August 1955, Hurricane Diane swept North Carolina.... In August 2013, Hurricane Diane hits the Gilded Balloon. The gorgeous but bad-assed Diane Spencer returns to the Edinburgh Festival for the third year running, with a new show Hurricane Diane, the follow up to the critically acclaimed shows Exquisite Bad Taste and her debut All Pervading Madness.

Some people go through life easily, others are accidents waiting to happen. Diane Spencer is a natural disaster, like a Calamity Jane Asher! Hurricane Diane sees her simple plans turn into ludicrous events that spiral out of control - she is trying to escape from herself but it's an impossible task. Diane engages with a conversational style with a mix of social commentary and storytelling (taken from her weird real-life existence!) that's peppered with punch lines. This year's show she touches on the following:

Burning the past: In an attempt to contain potential embarrassment and stop her Mother reading her diaries, Diane held her own private Nuremburg and held a bonfire on a windy day. This act culminates in Diane's most private burning thoughts littering the surrounding village.

Dignified Exit: People are living longer, but what quality of life do they maintain? In order to prevent a loss of dignity in old age Diane's Mother has devised the perfect death plan involving a mars bar and a roof, and Diane as the "euthanasioneer".

New boyfriend troubles: Diane has a new boyfriend - Why does she feel the need to destruct her privates in order to impress the man she loves?

Diane has performed at festivals in New Zealand, the UK, and Australia, including the prestigious Melbourne International Comedy Festival. She's recorded three DVDs: Exquisite Bad Taste, Lost In The Mouth Specific and 2009's recording of her solo show TamPomPom, rebranded Wit, Charm And Filth. Wit, charm and filth are qualities Diane has in spades.