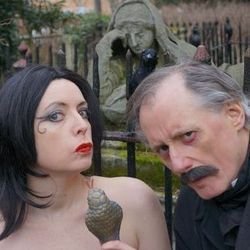 Fame! Notoriety! Death! Join Edgar Allan Poe, Cleopatra and many more historical figures as they host celebrity chat and a variety show from beyond the grave. You've been dying to see this one. Joan Crawford meets George Orwell in a chat with Lord Byron or the infamous Witchfinder General. Poe meets Poe? Questions from the audience? The séance where no one needs to knock twice on the table. Featuring historical figures as well as straight up stand-up - different guests every day. Elise Harris and Paul Wady make sure that history keeps on repeating itself.