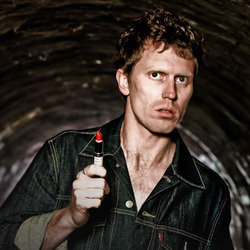 If you've read this far, you've either cheated, thought about cheating or been cheated on. We have that in common. Award-winning Aussie comedian David Quirk takes us back to one day of his life, in Finland; a day that changed everything, when he shook hands with danger and didn't let go. Part tribute, part confessional, a serious joke, rated R - Shaking Hands With Danger - a good show by a bad person. 'Radical, dark and hilariously appalling' (Scotsman). Winner - Comic's Choice 2013, Melbourne Comedy Festival.

Australian award-winning comedian David Quirk returns to this year's Fringe after a two year break with a tale that takes us back to one night in Finland; a day that changed everything, when he shook hands with danger and didn't let go.

Part tribute, part confessional, this is a love story in reverse where people get hurt and cheaters change their spots. Everybody's done it, or thought about doing it, or knows someone who has. So let's talk about it.

A triumph at the Australian festivals this year, Shaking Hands With Danger won David the Piece of Wood Award (the comedians' choice award) as well as excellent reviews. It's a good show by a bad person about lovers, infidels and a fight with Slash. It has been in the making for nearly two years and, once you've seen it, you'll know why.

For those who like their comedy so dark it's burnt, David's material travels between the profane and the profound. Since 2006, he has regularly performed on the Australian comedy circuit and has performed full length stand-up comedy shows at the Melbourne, Adelaide and Edinburgh comedy festivals. He is a fixture on the Melbourne International Comedy Festival Roadshow, starred in ABC TV's Problems, has supported Heath Franklin's Chopper on tour and wrote and performed in the two hander play The Incident with Edinburgh Comedy Award 2011 nominee Sam Simmons. He also has extremely white eyebrows.