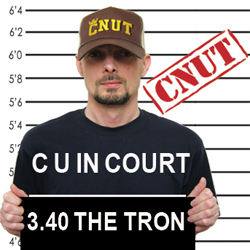 When French Connection tried to stop one man selling his Cnut clothing, they got more than they bargained for. This is the extraordinary story of how award-winning comedian Griffiths fought the clothing giant for his right to trade CNUT. A 21st-century David-vs-Goliath, Griffiths exposes the double-standards, intimidation and ruthlessness of big corporations. 'As well as being extremely funny, Dave's show tells us something very important about corporate power and freedom of expression'. (Guy Osborn, Head of Law University of Westminster). 'Very funny' (Time Out). Directed by Neil Kinsella.

Question: What happens when a global fashion giant threatens a stand-up comedian for trademark infringement?

Answer: A legal battle that will cost the losing party millions.

Award winning comedian Dave Griffiths makes his Edinburgh Fringe debut with a one-man show that recounts, first hand, his experience of fighting for his right to wear and trade King Cnut Clothing against the global fashion giant French Connection.

Dave Griffiths was establishing himself on the stand-up circuit whilst building his newly founded fashion label King Cnut Clothing, when French Connection threatened him with legal action. His offence? Wearing a T-shirt displaying an acronym which could be interpreted as a salacious word, alongside the words 'French Correctio'.

The company demanded he cease wearing the T-shirt with immediate effect and pay to them any profits gained from selling the offending item. Dave stood his ground. Some would call him foolhardy, his actions ill conceived, but for Dave it was a matter of principal. No one had the right to tell him, or anyone for that matter, what not to wear, and since when did French Connection own 'Correction', as well as every acronym? C U In Court is the incredible story of what happened next.

Truth is stranger than fiction and in the case of King Cnut v FCUK the facts take on comedic proportions. With the foresight to record every conversation and keep every written document, Dave Griffiths, the artful dodger of trademark law, presents his case to the audience. It is a story of David and Goliath proportions that begins with a letter of intimidation from one of the most reputable law firms in the world, and ends with the withdrawal of thousands of clothing lines from French Connection's stores worldwide, at a cost of millions to the company.

Dave Griffiths took his first steps as a stand-up comedian performing at open mic nights and after winning ITV's Take The Mike he gave up the day job to focus on his comedy career. Regular performances at the UK's top comedy clubs followed, and from 1998 - 2000 he was part of the writing team on Channel 4's BAFTA nominated satirical comedy series, The 11 O'clock Show, which launched the careers of Sacha Baron Cohen, Ricky Gervais and Mackenzie Crook. In addition to writing and performing, Dave is regularly invited to lecture on trademark law. He is the proud recipient of a Thames Valley Bravery Award for apprehending a robber who stole £22,000, and has climbed the Matterhorn.