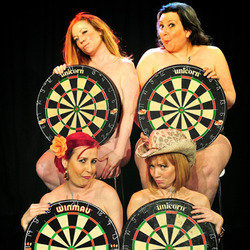 WAGS are so last season. This year it's all about the DWAGS! A kiss-and-tell sex texter, a bout of dartitus and a bitchy domestic about prize money. Meet the Beckhams and the Rooneys of the oche in this hilarious, no-holds-barred exposé of the passionate, competitive, dramatic world of darts where what matters more than anything is finishing on a double! 'The best character comedy I've seen, Victoria Wood and League of Gentlemen couldn't do better' (Independent). 'On the fringe of stardom' (Daily Mail). **** (Sunday Times). **** (Scotsman). **** (Metro). **** (Herald).

After a year of research into the darts world and hanging out with many real life "DWAGS", Lauretta & Sharon Gavin have created a brand new character comedy show delving into the sport everyone's talking about.

WAGS are so last season. This year it's all about the DWAGS! Meet the Beckhams and the Rooneys of the Darts world in this hilarious no-holds-barred exposé of this passionate, competitive and dramatic world, where what matters more than anything is finishing on a double!

Written by sisters Lauretta Gavin & Sharon Gavin, from the comedy double act Gavin & Gavin, that have previously written and performed in four highly successful Edinburgh shows with transfers to the West End, Soho Theatre and nationwide.

Philippa Sarll - her TV credits include Eastenders (BBC One), Neil Morrisseys's Secret (BBC), The Robinsons (BBC) and Swiss Toni (BBC). She has also toured with The Vagina Monologues.

Elizabeth Guest: Television credits include, gorilla in Fierce Creatures, Lady Elizabeth in the Prince and the Pauper for BBC One. Her theatre highlights include playing Beatie Tomlinson in The Magistrate (West End) and Lady Windermere in Lady Windermere's Fan (Salisbury Playhouse). She was nominated for a Manchester Evening News Award for best Newcomer for her portrayal of Kit and Shonna in Top Girls (Bolton Octagon).

Angela Wilson - Director/additional writer: Angela trained as an actress at Guildford School of Acting. She completed her MA in script writing at Middlesex University. Her final submission for her Masters, an original TV comedy pilot, was optioned by The Comedy Unit, RDF media; a series is still in development. She has directed previous Gavin and Gavin shows and co written on their comedy pilot The Kennedys.