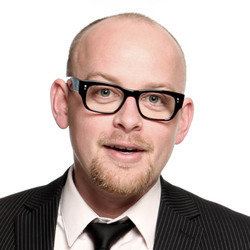 One of the British Comedy circuit's best and most exciting talents. Star of John Bishops Only Joking is back at the Fringe with a brilliant hour of stand-up comedy charting his romantic aspirations and failings and being very funny with it too. A show about love, life in light of a lack of love and the general humorous misuse of an existence. Plus there's a CGI car chase. Honest. 'Nightingale can make just about anything funny. He's lightning-quick' (Time Out). 'Magnetic, entertaining and wonderfully funny' (ThreeWeeks). 'Pretty damn funny' (Fest).

Following last year's critically acclaimed show The 11 and ½ ill Conceived Edinburgh Shows Of Dan Nightingale; Dan is back once more ready to take Edinburgh by storm. His new show - Dan Nightingale - Love In The Time Of Cholesterol charts Dan's romantic aspirations and his own failings in that department. He is a self-confessed, emotionally literate 32 year old wally, who after years of romantic irresponsibility, is now frantically looking for love and making a total mess of it. Strong women raised him and now his family are putting pressure on him to sort his life out and meet that 'someone special'. Dan is now in search of that perfect relationship and in the show discusses topics that include the meaning of love songs, wife envy, male broodiness and ultimately wants to find out if 'the perfect relationship exists.

Dan Nightingale is one of the best performers working today. He mixes brilliant observation and energetic characterisations with killer punch lines that is original, playful, intelligent, exciting, sometimes ridiculous but always hilarious. He's a natural with the crowd, bouncing off any audience interaction wonderfully.

He recently appeared on Sky1's John Bishop's Only Joking. He is a regular headliner at the Frog and Bucket, where he founded the hugely successful Beat the Frog night, as well as being a firm favourite at some of the best clubs in the country. In 2004 & 2005 he developed his skills performing early material at the Edinburgh Fringe, alongside award winning comedian Josie Long. He returned in 2008 with his critically acclaimed debut hour Geronimo, which he subsequently took to the New Zealand International Comedy Festival. Dan has also gigged around Europe and as far afield as Dubai. As well as stand-up, Dan's other work includes voiceover work for children's television, local radio & television warm up at ITV and BBC.