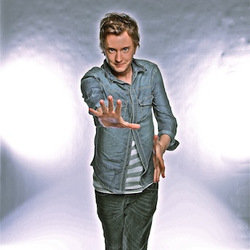 I've done a crime (soz), now I've got to do the time, and by time, I mean this show. Things featured in it are: sketches, songs and Sandra (my community support officer). #YOLO. #SWAG. Praise for Delete the Banjax: 'Consistently excellent' (Guardian). 'Daft, deft and hugely inventive' (Independent). **** (Time Out). **** (Chortle.co.uk).

Dan has committed a petty crime (#soz #swag) and now he's got to do the time. And by time, what he's actually got to do is this show. Yes, unfortunately for him, to repay his debt to society, Dan must perform an hour long, entirely original, one man show, once daily for the duration of the Edinburgh Fringe Festival 2013.

However, fortunately for us, with a mixture of sketches, songs, and Dan's community support officer, Sandra, it looks like the show might be alright. (#YOLO)

Dan Cook's TV credits include Fireworks, The History of Technology (Both Channel 4) and Big Babies (CBBC). As part of 'Delete the Banjax', Dan has performed on BBC Radio 6 Music, BBC Radio 4, and BBC Radio Scotland.