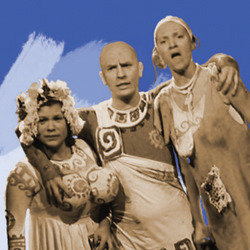 Dance performed on the following days in August 2013...

Russian bouffon clown meets Greek mythology in sketch comedy. Travesty and metamorphoses abound. Sunny and ironic the actors create a dream-like whimsy on stage that is as much about being aesthetically pleasing as it is about the unique tangle of humour and drama. 'OPS actors create characters and images without words - reminiscent of French Nouveau Cirque - bringing together drama, theatre and traditional circus...' (Petersburg Theatre Magazine).