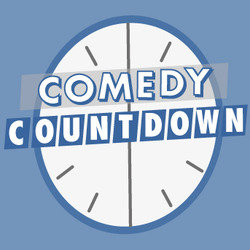 Witness comedians pitted against each other in something almost resembling everybody's favourite teatime quiz! Previous contestants include Mark Watson, Sarah Millican, Richard Herring, Josie Long and Alex Horne. Hosted by Dan Atkinson. 'The best version of the game I've seen since the untimely departures of Richard Whiteley and Carol Vorderman ... great, shambolic fun' (Scotsman). 'Undemanding, great fun and the kind of unique, off-piste entertainment that sits well with the spirit of the Fringe' (Guardian). 'Rearrange these letters into a word that describes "Comedy Countdown": 'T.N.F.A.S.I.T.A.C.' (LondonIsFunny.com).

Charmingly shambolic, Comedy Countdown promises an hour of outrageous arithmetic and wacky wordplay brought to you via the spontaneous game-show ramblings of guest comedians and local favourites. The result: an always entertaining and interactive night of joyful banter, unexpected abilities and terrible spelling.

Guided by your regular host Dan Aktinson and unrestrained by scripts, the rotating line-up of irreverent puzzle-busters will take you on a journey that is as unpredictable as it is riotous.

Comedy Countdown has become a cult hit, enjoying sell-out audiences and a devoted legion of fans.