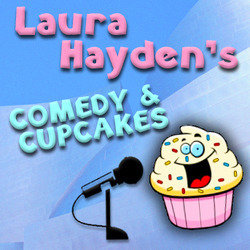 Comedy and Cupcakes is Laura Hayden's tremendously popular show from Los Angeles, California. Combining her two favourite things, laughter and baked goods. The show's success indicates that Laura is not alone in her love of comedy and cake! Having performed worldwide Laura has a tremendous amount of comedian friends she will invite to perform in her favourite show. Laura sets the stage for fun, highlighting five comics each show and delicious cupcakes. The chocolate Guinness cupcakes with whiskey cream frosting alone can make for standing room only. Be on time if you expect to get a cupcake.