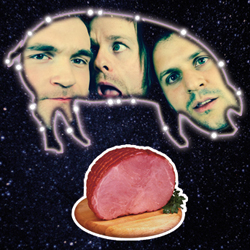 Magic / sketch show performed on the following days in August 2013...

Sixteen nights only - will sell out! The surprise hit and most talked about sketch act of 2012 are back with their brand new show. 'Ingenious' (Scotsman). 'The Colour Ham will take your breath away, hide it and then make it appear in someone else's pocket' **** (BroadwayBaby.com). 'It's a formula that shouldn't work but it really does' **** (EdinburghSpotlight.com). 'One of our favourite shows of 2012' (Ginge, Geordie, Geek). 'These guys had the audience in the palm of their magical hands - straight up belly laughs for the entire hour' **** (Skinny).