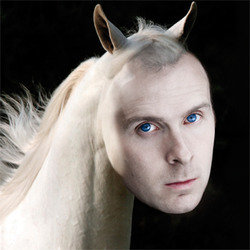 Characthorse follows a spectacular year that has seen the celebrated comedian make primetime TV appearances in BBC Two's Life's Too Short and as a series lead in BBC Three cult hit Being Human, as well as recording his first full radio series, Colin Hoult's Carnival of Monsters, broadcast throughout July on BBC Radio 4.

From a Transformers strip bar to an East Midlands cowboy club, the show breaks new ground for the Writer's Guild Award-winner following his nationally acclaimed trilogy of darkly theatrical live shows Carnival of Monsters, Enemy of the World and Inferno (2009-11). Retaining all the dazzling invention and razor-sharp performances that have made him a regular Festival hit, Characthorse promises to reveal a brighter, joyful, warm-hearted side to his irrepressible wit and irresistible flights of fancy.

Stripping back his act to return to the quick-fire character comedy at its heart, the new show also sees Hoult get as close to stand-up as a restless character-junkie can, with some of his most personal moments to date. Above all, Characthorse sees Hoult revelling in the entertainer's craft, and promises to dazzle and delight audiences all month.