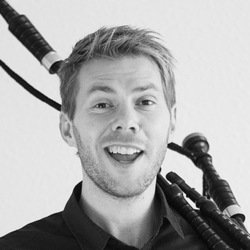 Claus tells about the rock'n'roll career of his life as a full-time bagpiper. He combines his show with improv and plays the most unexpected tunes. He is the only bagpipe comedian in Europe - no shit! 'His set was incredibly inventive and very funny' (Leicester Comedy Festival). 'Impressive ability to embrace the audience' (Randers Amtsavis, Denmark). Bonus info: He is the only man in the world who has done a parachute jump while playing the bagpipe - in a kilt.