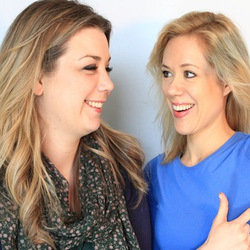 Wilkinson and Ford met in 2005. Six years later they joined forces by recklessly losing the 'and' to become Wilkinson Ford. This popular comedy duo bring you an hour of high energy, mirthful live sketches, film interludes and all round side-splitting silliness in their new show, Webmasters. There'll be hashtaggin' in the streets as their playful, friendly and often surreal style explores the comical world of the World Wide Web and asks, does anyone still poke? A must-see for 2013.

This year, the popular comedy-duo join talents to create a multimedia show, based on their mutual obsession with the Internet. It's an hour of high energy, mirthful live sketches, film interludes and all round side-splitting silliness, based on all things World Wide Web.

There'll be hashtaggin' in the streets as their playful, friendly and often surreal style explores the comical side of life online.


Comedy duo Wilkinson Ford formed in 2011. Since then they've been wowing both online and live audiences with their unique brand of sketch and character comedy.

Their spoof take on a Wilkinson Sword commercial attracted the attention of the BBC and won them a host of internet fans as far afield as Barbados!

To date, they've staged two full length shows; The Gherkin Fantasies which enjoyed a successful run at the Edinburgh Festival in 2011 and The Wilkinson Ford Variety Show which they performed at London's Lion & Unicorn Theatre in 2012. Both shows have combined pre-recorded footage and live performance to brilliant effect.

This year they return to the Edinburgh Fringe with a new show, entitled Wilkinson Ford: Webmasters, using the same compelling formula.

Both talented performers in their own right, Nicola Wilkinson (actress and stand-up comedian - Finalist, New Act of the Year 2013) and Claire Ford (comedy character actress and film-maker - Creator of internet sensation Terri Skyler of BBC Pilot Fat Pipes fame) have amazing chemistry as a double-act, making Wilkinson Ford a name to be sure to look out for!