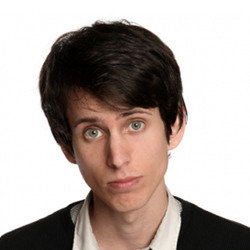 Brand new show from Dave's Leicester Comedy Festival Best Show winner 2012. Honesty is a virtue and widely perceived to be the best policy. So why do so many people seem to use it as an excuse to be rude? Tired of being told it like it is? Chris (Dave's One Night Stand, Radio 4) tells you how it possibly could potentially might be, he thinks. 'Has the talent to one day have the world at his feet' **** (List). 'Terrific' **** (Skinny). 'Hilarious' (Scotsman).

Honesty used to be a virtue and was once the best policy. But now it is fast becoming an excuse for rudeness. Why? Because too many people don't seem to know how to use it.

All too often people mix up their subjective opinions with objective fact, throwing down insults as if they were pearls of wisdom. Buzz-phrases such as 'tells it like it is' and 'straight talking' are often used as a veil to mask this increasingly inherent rudeness.

Even some comedians do it. But Chris Stokes hopes he's different.

People's frankly unbelievable reactions to his recent bad news, and finding himself talking part in a hidden-camera psychological experiment looking at human interaction (which he quickly realised he wanted no part in) opens Chris's eyes to how blurred the lines between honesty and rudeness have really become.

In his new show, Chris not only highlights the trend of rudeness in the name of honesty, he provides an antidote to the problem.

It's not all the big stuff. Along the way, amongst the many things covered are keyboard warriors, chatty greengrocers and there's also a sex scene with Alan Bennett.

Chris is a regular tour support for Milton Jones and Pete Firman as well as having appeared on Dave's One Night Stand. He is also the winner of Dave's Leicester Comedy Festival's Best Show 2012.