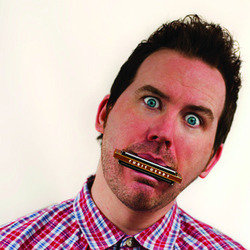 Chris has been a stand-up comedian for 10 years. Before that he performed in school shows, was a Butlins redcoat, a holiday entertainer for Thomas Cook and even auditioned for X-Factor, which all sounds very exciting. However, there is just one problem, he cant sing or dance. Come and laugh at a man who spent the best part of two decades failing to realise just how vocally uncoordinated and physically challenged he is. In short, Chris Henry isn't musical.