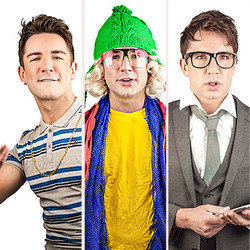 Chris Fitchew, in his debut Edinburgh festival solo show, brings together a fast and furious comedy spectacle. With an array of fun-loving and haphazardous characters, breakneck and side-splitting sketches, a sprinkling of hilarious songs, and a dance-off that has to be seen to be believed. 'A star!' (Lorraine Fitchew). 'A gifted comedian' (Bruce Dessau, Evening Standard). 'Your ribs are sure to ache' (List). 'The audience hangs off his every word' (Scotsman). Winner, Camden Solo Festival 2012. Book early!

Newcomer Chris Fitchew won Best Male Act last year at The London Solo Festival 2012 with his new comedy sketch show Jack Of All Trades, which he brings to this year's Edinburgh Festival. Chris's Edinburgh debut solo show is a melting pot of colourful characters. Using an array of comedy styles including sketch, character comedy, songs, slapstick and storytelling, Chris introduces us to Tom Cruise, as he's never been seen before, Hilary Devey's (Dragon's Den) confessions, a love affair with an iPhone and we go behind the scenes of the reality of a reality-TV star's disastrous life.