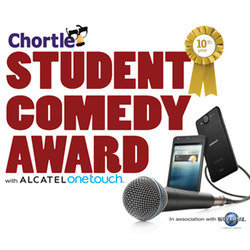 Hundreds entered, only eight survive, now one will be crowned Britain's funniest student. Over the past 10 years, leading comedy website Chortle has helped discover the likes of Simon Bird, Chris Ramsey, Tom Deacon and Tom Rosenthal through its Student Comedy Award. Now find out who will be next in this prestigious final, hosted by a top circuit comedian and featuring a special celebrity judge. The winner takes home £2,000 and gets a vital step up on the comedy ladder. With ALCATEL ONE TOUCH and Universal Pictures (UK).