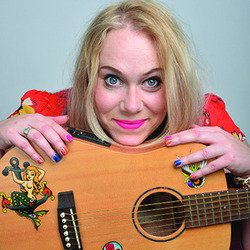 Carly Smallman is appalling. At 27 she thinks she will probably never own a house, meet the one or stop watching cartoons. She tells strangers that she works for NASA just to sound more exciting, and binge eats in public changing rooms. A warm, honest and very funny stand-up show (with songs) which looks at the chaotic events leading to Carly's debut at this year's festival. 'The most exciting female act in the country right now' (GQ Magazine). Star of BBC2's The Rob Brydon Show and as seen on E4.

Carly Smallman is appalling. At 27 she thinks she will probably never own a house, meet "the one" or stop watching cartoons. She can often be found binge eating in public changing rooms and lying to strangers (she doesn't really work for NASA, she just wants you to think she's exciting).

Following appearances on The Rob Brydon Show and E4, Carly makes her solo debut at the Edinburgh Fringe Festival this summer. The Appalling Carly Smallman promises to be a warm, honest and funny stand-up show (with songs) which looks, and laughs, at the chaotic events which have led her here.

Carly Smallman has been performing stand-up comedy and singing funny songs since 2009. She was named Musical Comedy Awards Finalist (2010), Laughing Horse Semi-Finalist (2010) and Amused Moose Hot Starlet (2009 & 2010). Her unique blend of outrageous impropriety and adorable sincerity quickly established her as a firm favourite on the comedy circuit and she regularly performs at leading comedy venues including The Stand, The Soho Theatre and The Udderbelly.

Carly's TV credits include The Rob Brydon Show (BBC Two), Secret Interview (Channel 5), The Most Annoying People 2011 (BBC Three) and The Top 50 Plastic Surgery Shockers (E4). She has also written and performed sketches for BBC Comedy Online, and has been heard on What's So Funny (BBC Radio 4 Extra) with Rufus Hound.