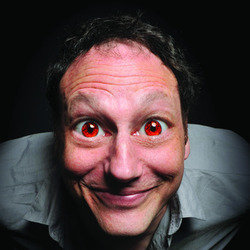 An unexplained absence was felt at last year's Fringe; an unsettling vibe that haunted our industry. Where was the Fringe veteran Carey Marx? He'd been a festival stalwart since 2003, captivating the audiences with his comic brutality and mischievous, gleeful delivery...

Alas, Carey was unable to perform last year due to a minor affliction they call a 'heart attack'. But he survived, and the aftereffect is that it has given Carey further material to twist into this darkly shocking new hour of playful humour. After all, this is a laughing matter, and the perfect idea for an Edinburgh show.

The only comic to win the New Zealand Comedy Festival Best International Show Award twice, Carey has a natural ability to find joy in the most unexpected places and this new show will be no exception. A regular favourite at London's Comedy Store as well as various other comedy clubs across the country, he can often be seen compering Reading, Leeds and Glastonbury festivals. He has also written two novels, appeared on various TV programmes from Slam (Channel 4) to The Stand Up Show (BBC One), written sketches that have appeared on the BBC, and co-wrote on Bigipedia for BBC Radio 4.