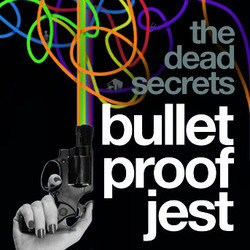 Comedy sketches by The Dead Secrets. Remarkable inventions, the greatest threat mankind has ever known, and a bear. And other such important issues. 'Contending with mediums like YouTube which have made it possible for us to create our own compilations, The Dead Secrets remind us of the power of the sketch show: woven stories, intelligent scripting and the unraveling absurdity of the human mind. This troupe is one to watch and definitely more rewarding than watching kittens falling downstairs' **** (TVBomb.co.uk) For video and audio sketches to whet your appetite, why not browse our website.

Bulletproof Jest - because the world needs to know about Space Geese. And then run away.

Who are The Dead Secrets and what do they want?

The Dead Secrets are a six-strong sketch comedy troupe who formed in 2012 after several years performing together in improvised comedy shows in Oxford; the world premiere of Bulletproof Jest is their first show at the Edinburgh Fringe as a group. They write, perform, direct and film their own material, and to date have only broken one camera.

* The shocking truth about Space Geese, the greatest threat mankind has ever known

* A behind-the-scenes look at Hollywood's latest blockbuster-in-development: the discovery of the Higgs Boson

And other such important issues.

Co-writer and performer Jen Sugden says: "We do a lot of what I'd call 'narrative sketch comedy' - fully realised characters with developed story lines. Whilst we intersperse this with short silly sketches, to change the pace and tone, one of our strengths as a group is the creation of short stories populated by characters that you'd, hopefully, want to watch again (and again)."