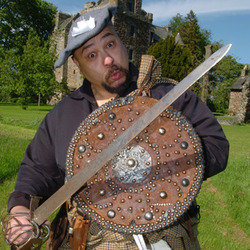 Bruce Fummey has built a reputation for bringing an hysterical and irreverent approach to Scottish historical events. In The Jacobites we have a reprisal of the sell-out Fringe show from 2007, only this time you can get in for free! From Henry VIII to Bonnie Prince Charlie. In 2007 Chortle.co.uk said: 'You will be hard-pressed to find a more engaging performer on the Fringe. Do go and see this show'. That advice is every bit as valid in 2013.