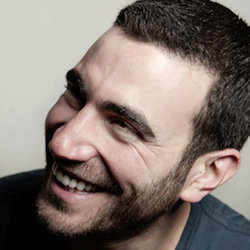 Hot on the heels of 2010's critically acclaimed Brett Goldstein Grew Up in a Strip Club, Brett returns to The Edinburgh Festival Fringe with a new show Brett Goldstein Contains Scenes of an Adult Nature at The Pleasance from 31st July - 26th August (not 13th).

Winner of Dave's Leicester Comedy Festival Award 2013 for Best New Show, Brett Goldstein Contains Scenes of an Adult Nature is an evening of impeccable stand-up guaranteed to bring in the laughs. Brett Goldstein takes a look at the rise of online pornography through a filter of stories about sex, crying, and how to survive a New York Blackout without waking up hating yourself.

After running a strip club for his father, Brett moved from Spain to New York to clean up his life. Once there he got embroiled in the world of lesbian beat poetry, ethical sluts and a man who operates entirely on instinct. These characters took him on a journey towards the ultimate fantasy...But some fantasies should really stay in your head...

In addition to being a successful comedian, Brett is also an extremely talented actor and writer. His diverse acting credits include starring in Channel 4's Derek, co-starring in the feature film The Knot and starring in Sky's 30 And Counting and Fergus and Crispin. Brett is currently developing several of his own self written TV and film projects.