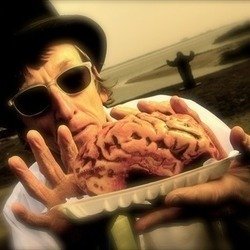 An original musical comedy that builds on the idea that human beings use only 10% of their potential brain power. When an eminent professor grows a brain, he fails to realise that the brain may actually develop a personality of its own. Loosely based on a slew of 1950s B-movies, this show takes a humorous and often surprising look at what it means to be alive. (Features a bald man and a monkey). From the writer of the 2012 sell-out Fringe show, Terror on Presley Beach and 2010's big superhero musical, The Invective Dan Kamikaze.