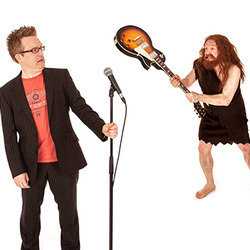 His auto-correct song has over 150,000 views on YouTube. He's written music for BBC, Channel 4 and Absolutely Fabulous. Now Ben Champion brings a solo show of stand-up and comedy songs to Edinburgh, in which he asks - what does it mean to be human? Is it all about cooking, superstition and texting while drunk? All will be revealed, in this very human performance, featuring language, music and jokes. Sometimes all three at the same time. If you're a human, or even know someone who is, this show is for you. 'Smart, funny and awesome in equal measure' (**** FringeGuru.com)

Having spent the last two decades writing original music for Emmy and BAFTA winning television and film including Blue Peter and Absolutely Fabulous, Ben Champion has turned his very musical hand to musical comedy. He knew he was on to something when his video for That Auto-correct Song went viral, as over 150,000 people could relate to typing "shining star" on their mobile phone, and it coming out as "whining spaz".

Having got to the heats of So You Think You're Funny 2012 and the semi-finals in 2013's Musical Comedy Awards, Ben Champion is poised to make a splash at Edinburgh 2013.

Champion's debut solo show features an hour of musical comedy with the accomplished musician playing guitar and keyboard while musing on what makes us human and celebrating the universal human traits that unite us all - is it all about cooking, superstition and texting while drunk? Can we really clone a Neanderthal? Ben Champion has written comedy songs to find out.

This debut show is an eclectic and varied brand new hour of music and comedy by Ben Champion - a fast rising comedian as well as an accomplished musician in his own right.

"It turns out that, among many other things we have in common, all human cultures enjoy wordplay, music and jokes," says Champion, "so if you're a human, this show is for you."