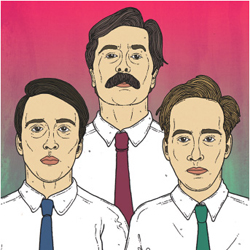 An absurd and darkly comic play about loneliness, power and the pettiness of men at work. Set in the intensely bureaucratic world of an isolated industrial compound in the desert of a distant land, the play follows the arrival of eager newcomer Dobbitt, his tortured middle-management colleague Hanrahan and their power-obsessed boss Merkin, as they lie and abuse one another to vie for supremacy, friendship and escape. Starring Edinburgh newcomer and Chortle award nominee Mike Wozniak, Tom Golding (The Ministry of Curious Stuff, Anna & Katy) and Chortle award nominee Graham Dickson (Austentatious). UK Premiere.