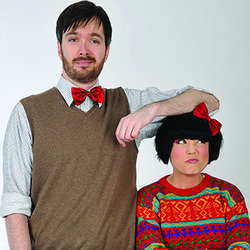 Oh pants! It's laundry day! But Bec ('side-splittingly funny' ThreeWeeks) and Tom ('clever gags and bumbling charm' Scotsman) have other ideas*. Join the puerile pair in a world of silliness, make-believe and bad celebrity impersonations. A sketch show for cool kids by childish adults. *Warning: Ideas may contain awesomeness.

Oh pants! It's laundry day and EVERYONE is at the laundrette! Most adults would wait quietly for a washing machine, but Bec and Tom have other ideas*. Join the puerile pair in a world of silliness, make-believe and bad celebrity impersonations. It's a sketch show for cool kids by childish adults.

Bec Hill and Tom Goodliffe met at the 2009 Edinburgh Fringe and recently began performing as a duo at Comedy Club 4 Kids, where their upbeat tomfoolery and absurd antics proved popular with children and grown-ups alike. Awesome Laundry is their debut full-length show together and blends double-act banter, inspiring creativity and a dash of slapstick.

Bec is an Australian comedian who has gained worldwide attention with her YouTube and Twitter presence, as well as her acclaimed solo Festival shows. Her arts-and-crafts approach to comedy earned her a place at this year's Sky Cat Laughs Comedy Festival in Kilkenny, where she performed with David O'Doherty for the Kitten Club children's shows. Tom is a British stand-up, writer, presenter and big friendly nerd. He's supported The Boy With Tape on his Face on tour and has written and performed two successful solo stand-up shows at the Edinburgh Fringe. He regularly performs stand-up comedy to audiences of adults, although some of them could really do with babysitting... by marines.