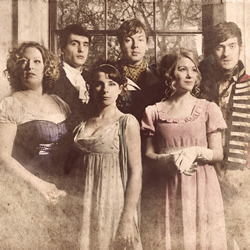 Come see a new, hilarious, improvised Jane Austen novel every day - for free! Back after their smash 2012 debut, Austentatious cook up entire plays full of wit, flirtation and dastardly behaviour. You are cordially invited to see Austen's lost works (Pride and Predator, Northanger Rabbi) performed before your astonished eyes. Swooning guaranteed. 'Constant wit and verve' **** (Times). 'Supersmart and terrifically funny ... a true homage to ... one of the greatest female humorists who ever lived.' **** (Scotsman) 'One of the most impressive comedy shows on the Fringe' ***** (Chortle.co.uk).

Following on from a wildly successful Edinburgh run in 2012, Austentatious: An Improvised Novel is back - and, once again, it's free!

Recommended by The Times, The Guardian, The Evening Standard and Time Out, Austentatious: An Improvised Novel is an hour long comedy play spun in the inimitable style of Jane Austen - and 100% improvised to boot. Performed in period costume with live cello accompaniment, Austentatious is an immersive and hilarious treat for fans of Austen and improvised comedy alike.

A major critical success, Austentatious was one of the Top Ten best-reviewed shows at the Edinburgh Fringe 2012 (British Comedy Guide). The last twelve months have seen the group sell out the Udderbelly: Southbank, storm the Hay Literary Festival and Latitude Festival and keep a sell-out residency in London's West End.

The show was also nominated for Best Character/Sketch Act at the Chortle Awards and appeared on BBC Radio 4 Extra.

Austentatious: An Improvised Novelis the brainchild of six-piece comedy ensemble The Milk Monitors:

Rather than the familiar roster of impro games and scenes, Austentatious presents an ambitious story with all the trappings of Austen's best work: rounded characters, delicate plotting, and real drama. With only an audience suggestion to hand, the six-piece create a laugh-packed tale that's never the same twice. Previous titles suggested by the audience include 'Pride And Predator' and 'Northanger Rabbi'.