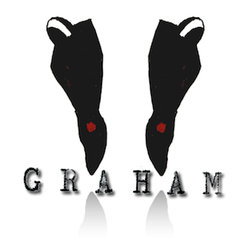 After their acclaimed freshman show Graham Rex, Graham return to the Fringe with brand new sketches in AntiGraham. When bloodthirsty badgers stage a coup d'etat, four friends find themselves trapped in an underground bunker, with only their dreams and memories for comfort. This meline revolution is tearing society apart, but will friendship put up a stronger fight? Probably not. Praise for Graham: 'It is performed with the style and confidence of Festival veterans... Definitely ones to watch' ***** (Three Weeks).

All is not well in the world. Disgruntled badgers have staged a coup d'état and are running wild across England. Four friends have survived the crisis by retreating to an underground bunker. Without any contact with the outside world, or any toilet paper, our protagonists have only their dreams and memories for comfort. Brand new sketches make up their increasingly unreliable recollections of what the world was like before the uprising.

The meline revolution rages overhead, but will friendship put up a stronger fight? Probably not.

After their acclaimed freshman show Graham Rex, Graham return to the Fringe with brand new sketches in AntiGraham.

Comprised of School of Comedy alumni Tom Moore (21), Beth Rylance (22), Patrick Delaney (21) and Arthur Sturridge (21), these four close friends will be bringing their unique blend of surreal and dark sketch humour to the Pleasance Courtyard for a 25 day run.

With a focus on high concept writing, Graham write together regularly, producing hilarious top notch material that has gained critical acclaim. Having performed comedy since the age of 13 with School of Comedy, the quartet each bring almost a decade of experience to their act, producing a polished, smart and enthralling performance far beyond their years.

The team is delighted to be performing at the Pleasance Courtyard where they have previously performed three sell-out shows with School of Comedy.