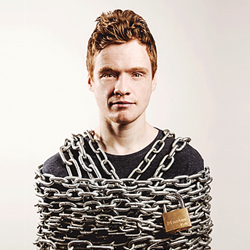 Is your life so awful you sometimes wish you could disappear completely and never be found? Then perhaps this is the stand-up show for you! 'Anyone who gives this spikily inventive performer the time of day will realise they're in the presence of an A-list talent' (Guardian). Star of Live At The Apollo and his own Radio 4 series. Join the former double Edinburgh Comedy Award nominee as he returns to the Fringe before embarking on a new major national tour.

As seen on BBC One's Live At The Apollo and star of three acclaimed BBC Radio 4 series in his own name, Andrew Lawrence returns to Edinburgh with his eighth consecutive all new stand-up show There Is No Escape before embarking on another major nationwide tour.

Since 2003 Andrew has worked his way up from open spot to headlining every comedy club in the country, subsequently becoming a formidably successful touring act in his own right, selling out venues all across the UK.

A double Edinburgh Comedy Award nominee, a Sony Radio Award nominee, twice nominated Best Headline Act at the Chortle Awards, Andrew is an internationally respected comedian and will arrive in Edinburgh immediately following a week of shows at the Montreal Just For Laughs Festival.

An act that, with a quietly industrious approach, has well and truly paid his dues and earned the place he now holds at the top table of stand-up comedy in the UK. No easy breaks, just honest talent and hard work.