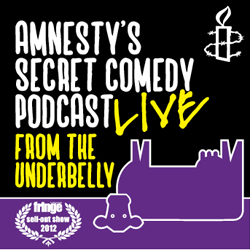 Sketch show / stand-up performed on the following days in August 2013...

From the producers of the Secret Policeman's Ball, Amnesty's acclaimed comedy podcasts are back. Previous shows featured the likes of John Bishop, Sarah Millican, Russell Brand and many more. Come to the live recordings for a showcase of the best comedy chat, sketches, interviews and songs from the brightest stars at the 2013 Fringe - and help Amnesty stand up for human rights. If you can't make it in person, join millions of others around the world by downloading the podcasts for free.

Amnesty's Secret Comedy Podcast - from the producers of The Secret Policeman's Ball - is back after last year's sell out run - live at The Underbelly. Bigger, funnier and more outrageous than ever. This year top comedians will take on the Secret Policemen's persona to host podcasts, which will be recorded in front of a 300-strong audience.

Julian Clary (in Edinburgh exclusively for Amnesty) joins Ed Byrne, Alan Davies, Jo Caulfield, Christian O'Connell, John Moloney and other top secret names to host the podcast shows that will feature the best comedy and the biggest names at this year's fringe. There will be 15 live shows throughout August, recorded at 13.20 in the Cow Barn on Thursdays, Fridays, Saturdays and Sundays. Tickets cost £7.

Julian Clary says: "I'm very excited to be a Secret Policeman for Amnesty at the Edinburgh Festival this year. Who'd have thought that by putting on a flasher's mac and getting my truncheon out I'd be making a difference to human rights?

"I've always been tickled by Amnesty's relationship with comedy from Amnesty's Balls to the present day, it's a great way to see the pick of the festival stand up talent while standing up for freedom."

The first show, hosted by Ed Byrne, is on Friday 2 August. Confirmed guests across the festival include: Zoe Lyons, Cassette Boy, Nish Kumar, Lucy Porter and The Boy With Tape On His Face with more top acts, secrets and surprises to be announced as the Fringe approaches.

The podcasts will be available at www.amnesty.org.uk/itunes

The 'critics vs comics' football match also returns to Edinburgh this year courtesy of Amnesty International with the comedians keen to trounce the critics for a second year in a row. It's billed as "such a grudge match they had to get Amnesty International to referee" and may live up to the hype this year, on Sunday 11 August in the Meadows. Kick-off 3pm.