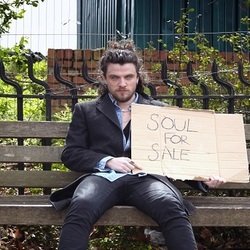 Today's youth: disenchanted and disengaged; our rights vanishing, we remain oblivious. Instead of submitting to criminal corporations and elitist politics, we must be reborn as renegades. Sounds LOL. ***** (List). ***** (No Borders Magazine). 'One of the boldest new voices ... mapping a route to a different class of humour' **** (Guardian). 'All the intellectual rigour of Vicky Pollard' * (Scotsman) 'He could become one of the most important, incisive comedians of his generation' **** (Chortle.co.uk).

Today's youth: disenchanted and disengaged; our rights vanishing, we remain oblivious. Instead of submitting to criminal corporations and elitist politics, we must be reborn as renegades. Sounds LOL doesn't it?

"I'm not sure what this show is about. The general idea is that this generation, my generation are rubbish people. We're entitled, disengaged and want everything easier and now.

We're self-loving and self-involved and completely distracted from life as it could and should be, at its most beautiful.

It's the dumbed introversion of us that allows the criminal corporations at the top to get away with exploitation, murder and cover up and ignore justice to service their own wealth...

But really, the truth is, I just don't know, I find this stuff scary and that's I suppose what makes it funny but really, I don't know. What is evil? What is wrong? How much of what anyone does is okay?

And in a world that I can only presume is godless is there really any point in trying to be good or virtuous at all? It's only life! Why don't we all just eat a cinnamon bun and let it happen.

I think this is how I feel. I made that up as I went along for my benefit as much as yours. I'm pretty sure the show will be uplifting by the end, I think, but then I find nihilism quite joyful and liberating. I'm a twat. It will probably be a good show."