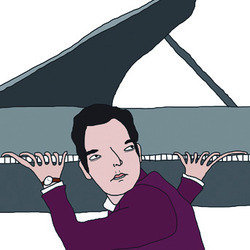 Amateur Transplants frontman Adam Kay sits at a grand piano and sings smutty songs. He has had 20 million YouTube hits (including the iconic London Underground Song) and three number one albums in the iTunes comedy charts. 'Fast-paced, filthy and incredibly funny' ***** (ThreeWeeks). 'Great guilty fun' **** (Telegraph). 'Brilliant - it left us with eyeliner streaming down our face' ***** (Cosmopolitan). 'Genius' (Scott Mills, Radio 1). 'This made me very, very happy' (Stephen Fry). www.amateurtransplants.com

Adam Kay brings his brand new solo show to Edinburgh this year - with a grand piano, a colourful vocabulary and a determination to score a number one hit single in 2013. The latest in a decade of hugely successful shows, this year's promises a brand new collection of wonderfully off-kilter smut, comedy and music from the man who brought the world the iconic London Underground Song.

Amateur Transplants frontman Adam has built up a fan base the size of which most comedians would happily sell their kidneys for. With sell-out tours and Edinburgh Festival seasons, his cutting-edge, darkly humorous re-imaginings of modern day pop and rock classics have gained him a cult following across the UK. And it's about time he had a number one.

Former doctor Adam first appeared at the Edinburgh Festival Fringe in 2005, achieving a sell-out run. He has since sold out Edinburgh runs every year since 2006. He has recorded four studio albums, and his recordings have consistently held Top Ten positions in the iTunes comedy charts since 2008. A proportion of album sales are donated to Macmillan Cancer Support, and he is proud to have donated in excess of £30,000 to date. Amateur Transplants YouTube videos have in excess 20 million total views. The hope is that it wasn't the same person clicking refresh 20 million times.

Adam writes extensively for TV, with comedy credits across BBC Two, BBC Three, BBC Four, Channel 4 and Radio 4, and has spoken at the Cambridge Union and the Cheltenham Literary Festival.

Adam's other show How To Be A Bogus Doctor is at Pleasance Beside at 5.00pm every day.