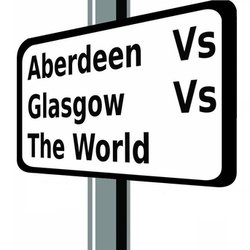 For two consecutive years, Ginger Ale Comedy has brought together some of the best, brightest, maddest, strangest and unexpected acts for a showcase that has played to full and sometimes over-full houses in many of the Laughing Horse Free Festival's finest venues. In this final showcase, they will once and for all put to bed which team has the finest, funniest, or maybe even just the most insane comedians as for one last time the battle rages between Aberdeen, Glasgow and The World! Let battle commence!