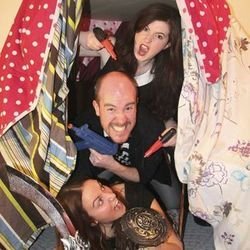 Some say three's a crowd. They're wrong. It's a gang! Not a gang with knives or guns. Just three best friends, armed with jokes, who want nothing more than to stab you into fits of laughter. And with nearly a decade of Fringe shows between us we know how to rough you up good and proper. In other words it's a silly sketch show. So come along if you like fun!