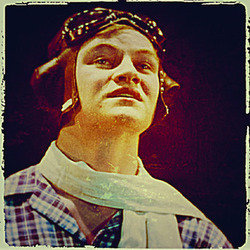 Classic Ealing comedy meets quirky physical theatre and song in this playful adaptation of the Powell and Pressburger film. It is 1945. A young airman jumps to certain death from his burning aircraft. His last words are to a girl he has never met: 'I love you June'. Soaring romance, caught between this world and the next. An ensemble of pyjama-clad evacuees sing and dream together in KCS Theatre Company's new production. 'Another league altogether' ***** (TheNewCurrent.jux.com, Caligula 2011). 'KCS Theatre has a remarkable Fringe record' (WhatsOnStage.com).