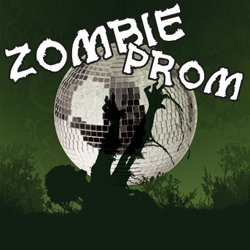 Satire / music performed on the following days in August 2012...

Zombie Prom is a musical. Set in a strict American high school in the 1950s, the show focuses on two students, girlfriend and boyfriend Toffee and Jonnie, who somehow manage to continue their relationship even after his suicide. There is a host of colourful characters including a school principal who is big on morality and a sleazy reporter. The final scene is full of absurd coincidences but these are all part of the show's appeal. Part 50s spoof, this will appeal to anyone who likes Grease - but Zombie Prom is far crazier and its anti-nuclear satire is winningly silly.