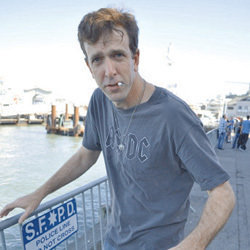 Sketch show starring Will Franken performed on the following days in August 2012...

Armed with a 'highly developed sense of the absurd' (New York Times), comedy virtuoso Will Franken deluges his audiences with a kaleidoscopic tsunami of mind-blowing character comedy so funny that people stop laughing only long enough to drop their jaws. A one man 'Monty Python' (San Francisco Chronicle), Franken has been featured on BBC America's The World Stands Up and has performed his patented theatrical lunacy in festivals worldwide, including Just for Laughs in Montreal. 'Best Comedian' (San Francisco Weekly). 'Best alternative to psychedelic drugs' (San Francisco Bay Guardian). 'The smartest comedy' (Oakland Tribune).

Renowned satirist and high-speed, quick-change character comedian Will Franken makes his Edinburgh Fringe Festival debut this year at Just The Tonic. His unique form of theatrical comedy is all contained in his one-man sketch roller coaster of mind-blowing and gut-busting hilarity, Things We Did Before Reality.

The title is taken from his highly acclaimed podcast series, Things We Did Before Reality is indicative of Franken's never-ending quest to mine the ludicrous depths of the subconscious and illustrate, by means of his uncanny acting ability, razor-sharp wit, and general disdain for political correctness, the comedic pitfalls of perceived reality.

Named Best Comedian by the San Francisco Weekly and "Best Alternative to Psychedelic Drugs" by the Bay Guardian, Franken employs his prolific and fevered imagination to bring to life such alternate comedic realities as Al Gore using a map and a globe to illustrate how the earth has become less flat over time via the dangers of "Global Rounding"; Parents of pick-axe murdered children forming their own specialized support group (POPAMC) to keep out the parents of fire-axe murdered children (POFAMC); Stephen Hawking expressing gratitude at an AA meeting as he no longer "needs to get high to discuss the event horizon"; and a well-meaning but misguided Victorian-era social worker distributing condoms to protect prostitutes from Jack the Ripper - all this and much more as Franken "wanders through a parallel-universe city" of "fun-house imaginings" (The Onion).

A one-man Monty Python's Flying Circus served American style, Franken has appeared on BBC America's The World Stands Up and has been featured in numerous international comedy festivals including Montreal's prestigious Just For Laughs. His solo show Good Luck With It debuted at the New York International Fringe Festival to rave reviews by the New York Times, and ran at San Francisco's Marsh Theatre.