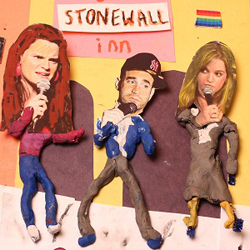 New York City based LGBT comedians Veronica Elizabeth and Kenny Neal host a stand-up comedy performance offering gay and straight perspectives - and everything in between! From the popular monthly show at the historic Stonewall Inn. Veronica Elizabeth is an '...intense New Yorker who takes no prisoners' with a 'slick and assured sarcasm' (TheaterJones.com). Kenny Neal was bored of being just another gay, so he became a writer, comedian and actor dedicated to dispelling stereotypes and proving that straights and gays are equally awful.