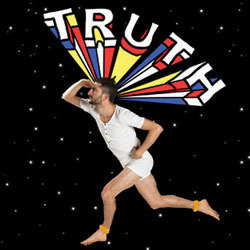 Truth is a collection of hyperbolic characters, secondhand costumes and professional dance moves all strung together with a true story.